For those of you who do not know-- this blog started because I told a friend on my break that I needed a hobby. Well, he looked at me over his slurpy from subway and calmly told me that he thought doodling was my hobby.Since I doodled on everything including the back of his receipt from subway. I was doodling myself burning down wal-mart since I was having a really bad day at work that day.(But I would really never burn down wal-mart for those people who may take that seriously)
So I started a doodle blog about all things that have me crazy right now.
I've recently started reading Korean webtoons and they're out of the box story telling has me crazy but that's another post. Last night I did another fan doodle of Sharean Morishita's two comics that she's doing right now.
Bottled Prince and Love Love Fighting.
Both of them are really good.
I'm about to run off to work so I don't have time to put links up.
I'll do that later.
Because I have another idea for another fan art doodle-- it's fan service for the ladies.You know how we are! I'm just having a ton of fun with this stuff. I consider it fun.The next post will be about the webtoons that I am currently obsessed with and maybe some fan art to.
So here's my fan art of the day. 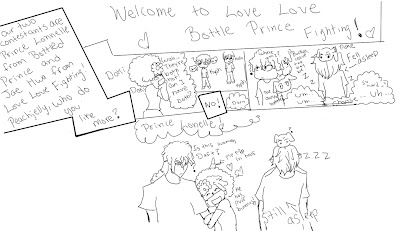 Posted by peachjelly at 8:46 AM